Acknowledging Accountability With The Judgement Card


This blog post was written as my contribution to the Tarot Blog Hop to celebrate the Summer Solstice which falls on 21 June 2015. Our Blog Hop wrangler Alison Cross has asked us to pick a card from the Major Arcana as our subject for this blog post.  I was a late entrant.  I picked the short straw and got the Judgement card.  Why couldn’t I get prettier and more positive cards like The Empress, The Fool, or The Star?  How did I end up with Judgement?

It was purely my choice. Really.  There were a few more un-exciting cards, like the Sun, that none of the blog hop participants had picked at that time.  I could have picked the Sun. But it was boring.  I could have pulled out of the hop too, but that would have made me look like a bloody wuss in front of my Tarotist friends.


Being Accountable For Our Choices


Yes choices.  And that’s what this blog post is going to be about.  At the height of the Summer Solstice, it is a perfect theme because we could all choose to get out of the house and embrace the warmth and abundance Summer brings, or we could choose to stay indoors because we are worried about tan lines.  And if we chose to stay indoors, at least be accountable for the fact that you’ve  just missed out on all that fun and the rest of the world thinks you’re a sad lonely wanker.


I am not typically fond of the Judgement card.  The card within my Radiant Rider Waite Tarot deck updated by Virginijus Poshkus, depicts an image of naked bodies rising from the dead, armed raised towards the heavens as an angel blows his trumpet.  Every time I pick this card for a client, the key message would be to get him to re-evaluate what decisions he had made in the past, the impact of these decisions on his future, recalibrate his thoughts about his goals and then reassess his plans to achieve these goals.  The message is very loaded.  Sometimes, it feels as if the card forces the client through a process of going through multiple stages of hoops and hurdles before he can finally get to his prize. Believe me, it is easier if I had picked the Star card and told him, “Don’t worry honey, all’s going to be well.” But life doesn’t happen like this all the time, does it?

In truth, when I kick that lazy-ass Jo out of my space and put my wiser Sun Goddess Tarot Jo’s hat on, the Judgement Card for me is possibly one of the most important cards in the deck.  It is only through the Judgement card, when we are encouraged to readjust the sails on our ship, that we can then move on to the World card, where we sail forward on our journey to achieve our goals and serve our purpose as it was meant to be.

So let’s take another look at the image on the Judgement card.  The angel in the card is Angel Gabriel, the messenger of God who famously appeared to Mary to announce the impending birth of Jesus Christ.   He was the angel that also famously appeared to Zacharias to announce the impending birth of John the Baptist to Zacharias’ supposedly barren wife, Elizabeth.  The naked bodies rising from the dead seems to be responding to the call of Angel Gabriel’s trumpet.  The mountainous terrain, clouds and waves in the background suggests the challenges one has to surmount throughout his journey to his goals.

When you view the Judgement card as a good knock on the head before you wake up your senses enough to walk towards the true potential of what the World card promises, I reckon, it is THE card that truly says it all and in many ways, ties the deck together to underscore what the true purpose of Tarot is, which is to offer you choices.

I have always prefaced my readings with clients by explaining to them that metaphysical tools like Tarot should not be used as “predictive” or “fortune-telling” tools.  Instead, they are meant to provide you with options with which you can make the right choices to influence your own desired outcomes.  The Judgement card points to the fact that whatever is happening with you today, is a result of decisions that you have made in the past.  If you’ve woken up to the fact that whatever you are doing now is not getting you to your goals in the way you’ve hoped, then you have the choice to recalibrate your thoughts, reassess your actions and re-chart your plans.

We do have the ability to make choices and we need to be accountable for the choices we make.


When it comes to making choices, one card that jumps up to me is the Lovers card.  Before I get rapped on the wrist by our blog hop wrangler for going beyond the brief to invite a second card into my blog post when we were only meant to talk about the one card we had picked, which in my case, is the Judgement card, please allow me to explain.

The image on the Lovers card looked quite a lot like the Judgement card.  Both have an angel in the background, but the key difference is that while there are naked bodies rising from the dead in the Judgement card, the Lovers card depicts a naked man and woman. Unlike the feel of the Judgement card which seemed cold, the Lovers card depicts a sun shining boringly over the couple, offering warmth, positivity and comfort. The snake in the tree points to the story of Adam and Eve and infers that life has full of temptations. The flames behind the man is a symbol of passion.  The angel in the Lovers card is the angel Raphael, who is the angel of healing.  The Lovers card tells me that hard choices that aligns with my personal values would have to be made. In spite of the fact that some of these choices are so difficult and puts me between a rock and a hard place, I should be assured that I am guided by my angel who will be helping and healing me through that process.  Only if and only when, I muster the courage to make the right choice, can I truly move forward along my journey to get to my goals.


Moving Towards Achieving The True Potential Of The World


When I reflect on both the Lovers and Judgement card together, I am reminded that  throughout a lifetime of challenges, along with its fair share of good times, I did have the ability to make choices that shaped how I responded to these challenges.  Whatever outcomes I had experienced as a consequence, were all attributed to the choices I made.  Judgement, tells me that I am almost reaching there.  I am almost getting to my destination.  It is a card placed just before the final card of the major arcana, the World, and quite aptly too.

When we can finally acknowledge that we do have the power to make things happen and embrace new opportunities by letting go of the past which may not serve us anymore and changing the way we think or changing our plans along the way, the World would be ours to hold.

The writer of this blog post is a marketeer by trade, and an intuitive reader by accident who deploys the combined modalities of a Tarot, Numerology and Astrology overlaid with her Clairvoyant and Clairsentient skills to deliver her readings with authenticity. She was awarded a Certified Professional Tarot Reader qualification from the Tarot Certification Board of America (TCBA) and is also a certified numerologist.  She is currently running a consultancy based in Singapore called Sun Goddess Tarot,  which provides confidential intuitive readings combining the metaphysical disciplines of Tarot, Numerology and Astrology via face to face and emails as well as readings at corporate and private events and workshops.  As a member of the American Tarot Association (ATA) and the Tarot Association of the British Isles (TABI), Joanna governs her practice under the associations’ respective code of ethics.  She is currently mentoring fellow intuitives on the path of developing their intuitive potential and actively teachers Tarot and Numerology as well. 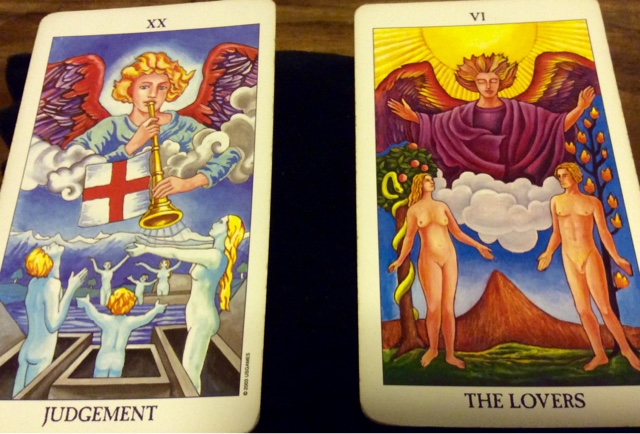 Posted by thecrazyangmoandhisangrywife at 07:35 13 comments: