I had an "A-ha!" moment last week. It stemmed from months of emotional struggle attempting to juggle a new environment at the office and a new phase of motherhood managing the hang-ups of a boy trying to be a man preparing to enter tertiary life.

I drew on the comfort from a friend who advised last year that I should stop being so hard on myself and to seek solace in new pursuits like taking up courses for self improvement.

My "A-ha!" moment came last week when I had decided to heed that advice and signed up for Tarot reading lessons. The appeal to me, laid in my perception that it was easy enough, wasn't time consuming as it took up only 2 weekends of my time, and I remembered being described as intuitive.

What I didn't know was that it was an extremely brain-draining course filled with intense emotional hard work and numerical sophistication for a hard-nosed, non-numerical person intent on not expending brain power during a weekend. And it was such an expensive course that I was surprised they weren't handing out bursaries.

I also did not realize that the weekend without the family at my side was decidedly uncomfortable and I forgot that the person who described me as intuitive years ago was Joel, when he skipped Sunday school for weeks whilst hiding out at the church canteen, hoping that I wouldn't find out.

So I went for my Tarot reading course with an opened mind and a receptive heart. I worked very hard that weekend and was surprised that I actually enjoyed the course tremendously. I found the stories behind the Tarot extremely fascinating and the myths surrounding it, intriguing. My Tarot teacher even said that I was intuitive and highly sensitive, hence that made it easy for me to tune into the energies of people whom I read the cards for. I felt very proud because throughout my school life, I was the renegade who copied my classmates' work and studied for the exams the day before the paper. I also had no interest in anything depicted in numbers unless there was a dollar sign in front of it. However, last weekend, I nailed every reading that required my interpretation of timeline.

My friends laughed at me or looked at me quizzically when I told them that I studied the Tarot. I would too if I were in their shoes. Some of them have asked me to read their Tarot a few days ago. I haven't had any complaints from them thankfully. I thought they had rather enjoyed the process as much as I did.

I graduate next week after another weekend completing the advance Tarot course. The girls at work and the boys at home joked that I should don my Hermes scarf on my head and brandish a pair of bangle-sized hooped earrings and be the "party trick" at social events, the "official mascot" during holistic festivals, set up a table at company dinner and dance events and busk at the MRT stations. Very funny.

So I will end this blog post by sharing my favorite Tarot card from the major arcana suit - The Empress. The Empress describes a person full of love, sense of nurturing, a generous and giving spirit. She brings warmth and comfort to everyone and everything she touches. She signifies an abundance of new life and encourages you to embrace life and all the goodness it brings.

I like that positive energy the Empress brings and hope you will embrace my new pursuit with the same open mind and a generosity of heart.

Postscript: After sharing this blog entry on Facebook, my friend in New York asked me to do a "long distance" Tarot reading for her. It was my first experience. However, after interpreting the cards and sharing it with her, she told me that I was "spot on accurate". It felt good to be giving her something from my heart. 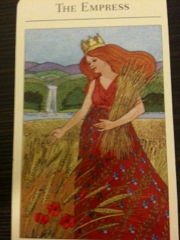 Email ThisBlogThis!Share to TwitterShare to FacebookShare to Pinterest
Labels: Initiated Into The World Of Tarot Reading