Once In A Blue Moon

Much as "once in a blue moon" is a common phrase, a blue moon month really isn't. The next time we get to experience the magickal moment of having 2 full moons in a month, would be in 2015. The blue moon this year, fell on 31st August.

What's Its Significance To Me?

This had been a magical year for me. I was blessed with an amazingly fulfilling journey as a certified professional tarot reader in the throes of reading for numerous clients who had become friends, as well as mentoring protégés and teaching groups of tarot enthusiasts who had begun to read professionally too. So, I had decided to take this opportunity to thank the universe for the abundance that I had been blessed with, with my version of a blue moon ritual.

This, I thought, would be the best way for me to mark the closure of my birthday month of August. It was quite apt too as I had opened the month with the celebration of Lammas on the 1st of August which coincided with my birthday.

What I Thought About The Word "Ritual"?

I used to think the word "ritual" sounded sinister. I guessed I had been watching too many bad b-grade movies that depicted rituals as so. In the world that I was familiar with, the only rituals I would be acquainted with were taking the holy communion during mass when I was a kid, lighting candles during Christmas to make a wish, preparing and eating special dishes at the Chinese New Year reunion dinner and washing my face with water scented with pomegranate leaves upon returning from a wake or a funeral.

So when I had decided to do a blue moon ritual, I tried to follow my heart with what I thought was an appropriate way to honor the moment using my tarot cards.

How Did I Celebrate The Blue Moon?

With my finger, I then traced a circle around these cards and candles anti clockwise whilst asking the universe to protect the space with positive light, wisdom and happiness. And closed this circle clockwise to remove all negativity from the space.

I also placed my favorite crystals and stones like citrine and pyrite around the candles. Both citrine and pyrite are known to attract abundance. I then anointed the candles with an abundance oil and proceeded to light them whilst saying my thanks to the universe for holding my hand through my journey, as well as for the love and support I got from my family and friendsq.

As the hubby runs a business too, I had decided that it would be a good opportunity for me to ask the universe to bless him too. So I added 2 coins in between the candles and whispered to the universe "Coins of silver and gold; Bring him abundance and wealth untold ; Riches come through every door; Make him money and draw him business ten times more."

I wrote all these into my tarot journal. Incidentally, this account about my experience during the blue moon was my very first entry penned into the journal, which also had a huge significance to me as the journal was custom-made for me as a birthday gift by the hubby.

So that's how I celebrated the blue moon this evening. It was made even more magical because I chose this blue moon to acknowledge all the new beginnings that I had experienced on my journey with Sun Goddess Tarot.

I did promise though that I wouldn't be thanking the universe for my blessings only once in a blue moon.

The writer of this blog post is a marketeer by trade, and a tarot card reader by accident. She was awarded a Certified Professional Tarot Reader qualification from the Tarot Certification Board of America (TCBA) and was recently certified as a numerologist in Singapore. A member of the American Tarot Association (ATA) and the Tarot Association of the British Isles (TABI), she is also a reader for the Free Tarot Network and is a mentor for the ATA. 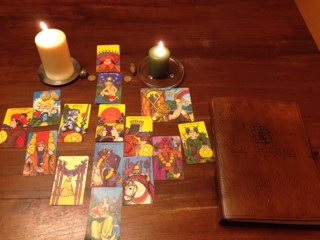 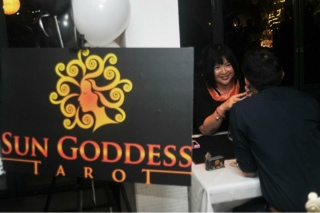 Email ThisBlogThis!Share to TwitterShare to FacebookShare to Pinterest
Labels: Thanking The Universe During The Blue Moon