Lessons From The Fairy Tale Tarot

Having My Cards Read By Another Reader

A few months ago, as I was faced with some challenges at work that affected my confidence, a fellow professional tarot reader from the Tarot Association of the British Isles, M, was kind enough to put some time and love into doing a tarot reading for me.   I thought to share it here within this blog post as my way of thanking her for the wonderful insights I got.  I needed that little nudge myself.  Sometimes, I am so focused on rendering the help and support to my clients, that I had often forgotten my own need for help and support from time to time. Sun Goddess or not, I am a frightened, lost and anxious Joanna in times of challenges.

M selected the Fairy Tale Tarot to do my reading.  Initially my myopic pride looked upon the deck with a haughty “What? You picked a “cartoony” children’s deck to do a tarot reading for me? Are you for real?”  I think M made the best selection really, because the fairy tales on each of the cards she picked for me had given me such invaluable advice that it stuck in my mind to this day.

She picked 3 cards from the deck, the 7 of Swords Reversed, the Wheel of Fortune and the 9 of Wands.

The 7 of Swords card was depicted by an image of the 3 Billy Goats’ Gruff with a troll on the bridge which had dark and murky waters running beneath it and the goats could not get across to the other side.

The card was picked in the reversed position, reflecting my fear of the changes in my work environment.  However, these were fears that were purely conjured in my head. My perception of the challenges was manifested in the reversed card which saw the troll and the dark, murky waters on top of the card while the rest of the picture was at the bottom.  This fear that I had conjured in my mind was not allowing me to “cross that bridge”.  I was so fixated on that “troll” being a threat that I wasn’t thinking far enough to see the lush green grass across the bridge.  The card was advising me to re-evaluate my thoughts, defeat my fears of the “troll”, and have a long term view to embrace the changes with confidence so that I could get myself into a better mental space and constructively add value to my job and to the colleagues that I worked with.


The Wheel of Fortune depicted an image of the story about the12 Dancing Princesses. Even when they were locked in their bed chamber every night, it was a mystery to the King as to how the princesses’ dancing shoes got worn out each morning.  So the King offered a reward of marriage to anyone who could solve this mystery.  And if the suitor could not solve the mystery, he would lose his life.  In truth, the princesses traveled deep underground each night and rowed across to the shining castle to dance with their 12 princes.  They kept to this routine each night, fearing that they would be found out, so they had to drug and deceive these potential suitors sent by the King to ensure they could continue with the routine.
The interpretation of this amazing card was that the wheel of fortune is a reflection of the changes within the cycle of life.  Life is constantly moving.  Everything from opportunities to fortunes come and go, and sometimes we are on top and sometimes we are at the bottom.  The wheel of fortune card was advising me to go with the flow of the changes in my environment and not respond to it with fear and dread.  I could not stop changes and movement. So I needed to embrace them and treat everything within that cycle as an opportunity from which I can learn.  Don’t think about fighting the changes, but rather, change the way I think and look for a positive potential within these changes.
The 9 of Wands depicted an image of the story about the Ship of Fools.  In this story, there were 3 sons (2 wise and one foolish).  The Tsar offered the hand of his daughter in marriage to anyone who could build and navigate a flying ship. The 2 wise sons were encouraged by their mother to try for this, but the foolish one was discouraged.  The fool walked into the forest where a little old man gave him advice on where such a ship could be found.   Along the way this fool collected a motley crew of other fools and they arrived at the Tsar’s palace.  Looking at the ship of fools the Tsar decided that he could not possibly give his beloved daughter to these fools. So the Tsar had to set the fool some impossible tasks, but all the fools worked as a team to complete these tasks, and ultimately the Tsar recognized this and gave his daughter’s hand in marriage to the fool, who was not so foolish after all.
The important lessons gleaned from this beautiful card were that I should learn to listen to my higher self, and not let my ego get in the way of my progress.  The fool thankfully did not listen to his mother when she dissuaded him to try for the hand of the Tsar’s daughter.  Like him, I needed to have more confidence in myself.   He also was smart enough to take advice from the wise old ma to locate the flying ship.   Like him, I needed to be guided by my inner wisdom.  Also, the fool knew his limitations of working alone to achieve his goals, so he teamed up with the other fools in the ship to achieve these goals successfully.  Like him, instead of fearing the changes in my environment, I should instead be working cooperatively with my colleagues within these changes.  When I planned, organized and integrated my ideas with others as a team, these plans will take shape in a manner that will bring satisfaction.
My Thoughts On Her Interpretation

I am very thankful that M had chosen the Fairy Tale tarot deck.  I drew parallels between the stories within each of these cards and my situation.   Overall, I saw a lot of water within the images on all 3 cards.  This is a reflection of my emotions driven by my fear of change.  Indeed, stagnation imprisons me. The darkness of the murky waters underneath the troll’s bridge as well as the underground within which the 12 princesses went to find their 12 princes are all a reflection of the darkness of my thoughts about my situation which was governed by my fear of change.   After the reading from M, I knew what to do to move on from this stagnation.  I started on a journey of regaining my confidence, and looked for positive potential afforded by the opportunities within that situation.

How Did The Reading Help Me Today?

I am glad that today, my entire perspective of the changes in my work environment is so different.  I welcomed those changes.  Without them, I don’t think I would be able to manage challenges at work as calmly as I do today.  I chose not to get stuck in my fear of change.  I chose to embrace it fully and take every turn on the road as a learning curve, and maybe even gain a few more friends along the way.  My team and I got much closer because we banded together with the genuine desire to do the right things at the right time with the right people.

So M, if you read this, I wanted to say thank you for bringing me some light when I needed it.

About the writer:
The writer of this blog post is a marketeer by trade, and a tarot card reader by accident. She was awarded a Certified Professional Tarot Reader qualification from the Tarot Certification Board of America (TCBA) and was recently certified as a numerologist in Singapore. A member of the American Tarot Association (ATA) and the Tarot Association of the British Isles (TABI), she is also a reader for the Free Tarot Network and is a mentor for the ATA. 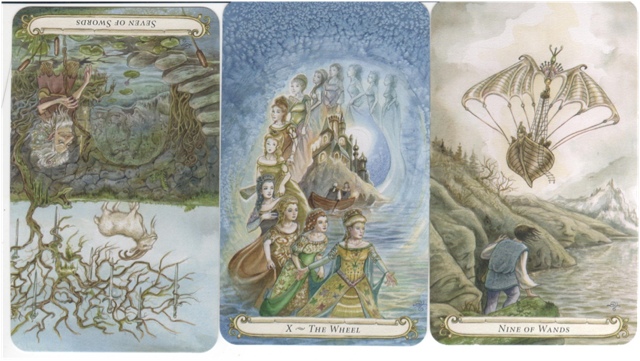 Email ThisBlogThis!Share to TwitterShare to FacebookShare to Pinterest
Labels: How I Conquered My Fear Of Change