My Six Of Cups Moment

Mum and Dad will celebrate their 45th wedding anniversary tomorrow.  Mum originally had a big party planned but cancelled it last week when Dad suffered a stroke and was hospitalized.  With Dad making a recovery more quickly than we had imagined, he was discharged earlier than expected and Mum had decided to cook a big feast to celebrate their wedding anniversary instead for just close family members.  I love going home to Mum and Dad's for a big meal. I always enjoyed getting pampered by them.  Even in my 40s they still think I am 14!

Over the last week, Dad and I shared  fond memories of the past when we regaled his antics as a political detainee incarcerated for off-center political views.  I used these memories to help him to cope with his dementia.  I questioned him about things we ate, places we went and names of his old friends just to "exercise" his memory.  The great bit was that these memories made Dad laugh a lot. This had probably helped with his recovery.

I too had fond memories over the last week of my younger days when Dad and Mum used to take me everywhere they went.  These memories helped me cope with my depression over Dad's stroke, his hospitalization and the uncertainty of when he might get discharged.   I remembered that we travelled to many places, went on culinary adventures all over Singapore in the middle of the night, went to dinner parties with Dad and his friends where we talked politics.  Even at the age of 4 or 5, his friends would sit up in surprise when I could talk about Marx, Engels and Lenin, and hum to the tune of The International.

Dad's hospitalization also taught me to find the child in me. I was trying to hold up my stoic appearance for awhile until I broke down and looked to David to hold my hands through this episode.  We  also found the child in us by encouraging Dad's hilarious antics in the hospital when he pressed the bedside buzzer just to annoy the nurses.  With the stress, we needed that laughter.

6 Of Cups In Tarot

With these fond memories and as I enjoyed the familial environment afforded by the Yuletide season,  I meditated over the 6 of Cups card.  The 6 of Cups card helped me connect with happy memories of the past to cope with the stress of the present.  I also drew lessons from the past to help guide me to make choices for the future.  Below are some of my favourite 6 of cups Tarot cards that I had picked amongst my decks.

6 in numerology, is a symbol of domesticity and familial matters.  It promises lots of love, care and nurturing support from one influenced by the 6 energy.   6 also represents harmony, unconditional giving and generous support.  It was written in the bible that God created everything in 6 days and rested on the 7th day.  The Jewish holiday of Shavuot starts in the 6th day of the Hebrew month of Sivan.  There are 6 points to the Star of David.  And my rocker-want-to-be husband David, who happened to be the Master of useless information told me that #6 is the pseudonym for Shawn Crahan when he played with the band Slipknot!

6 is also the number of the Lovers Tarot card.  The card represents not only love, union and partnerships but also personal choices.   The card is ruled by the planet Venus.  The Goddess of Love, Venus presides over relationships, marriage, union, harmony.   It is a number appropriate to mull on, particular during my parents' wedding anniversary.  The Lovers card also represents personal choices, and the balance between  values, principles, and ideals.  The card urges one to stay true to personal beliefs and reassess one's goals when confronted with having to make hard value choices.  You see, when I had to manage a difficult week coping with Dad's hospitalization and Mum's depression, I had to make that personal choice to drop everything to focus on the family.   Even when I had so many issues at work and my Tarot clients were calling me during this very busy month for readings to help them prepare for what was to come in the new year, I had to just drop everything to focus on Dad and Mum.  The family came first. They were my responsibility.  Nothing else mattered.  As J.K. Rowling said, "It is our choices that show what we truly are, far more than our abilities."

Do enjoy meditating on the 6 of Cups Tarot card. In the words of Charlotte Davis Kasl, "Happy memories become treasures in the heart to pull out on the tough days of adulthood."

The writer of this blog post is a marketeer by trade, and a tarot card reader by accident. She was awarded a Certified Professional Tarot Reader qualification from the Tarot Certification Board of America (TCBA) and is also a certified numerologist.  She is currently running a Tarot consultancy based in Singapore called Sun Goddess Tarot,  which provides confidential intuitive readings combining the metaphysical disciplines of Tarot, Numerology and Astrology via face to face and emails as well as readings at corporate and private events and workshops.  A member of the American Tarot Association (ATA) and the Tarot Association of the British Isles (TABI), she is also a reader for the Free Tarot Network and mentors Tarot protégés on behalf of the American Tarot Association 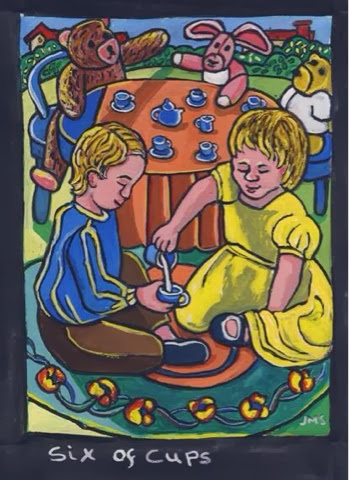 Email ThisBlogThis!Share to TwitterShare to FacebookShare to Pinterest
Labels: 6 of a Cups, Family, Harmony, love, Memories, numerology, Past, relationship, Six, tarot, The Lovers